Helipads operated by hospitals play a vital role in transporting critically injured people to their trauma and treatment centres quickly and efficiently. However, they can be dangerous places when weather conditions are inclement.

Ospedale Maggiore di Bologna’s helipad, named ‘Piazzola sopraelevata Maurizio Pezzorgna’ after the first pilot of the Bologna 118 helicopter emergency service, has been in operation for many years. Health and safety considerations meant that the surface required urgent refurbishment, as the existing epoxy surface had been damaged and become slippery as a result of frequent use of sprayed glycol for de-icing purposes.

The project presented a number of challenges. Firstly, a fast turnaround was essential, so the materials selected had to provide a fast cure cycle and be suitable for application in cold weather conditions. In addition, in the event of an emergency, the helipad would have to reopen immediately. Two half day windows had been set aside for the work, as the flight schedules for the helicopters had to be maintained.

The refurbishment work was completed by ACR di Reggiani Albertino Spa, who needed a high performance surfacing material meeting all the requirements of the project, including rapid installation, advanced levels of impact, chemical and abrasion resistance and anti-slip characteristics.

Watch the installation process in the brief video below.

Located at a height of 70 metres, the helipad was a difficult and complex project. In winter conditions, low temperature and high speed application and curing were essential. In addition, surface preparation equipment had to be lightweight, and high wind speeds meant that all tools, machinery and people were attached to the platform by safety wires to avoid the danger of falling equipment.

The end result is a non-slip surface providing high levels of grip for landing helicopters and transferring people, even in windy conditions. Resdev’s Deckmaster HFS ID has provided an effective and long term refurbishment ensuring safe operation for the helipad into the future. 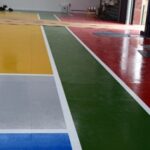 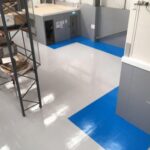